Steven Norris graduated in Spring 2021 with a master’s degree in Global Media and Cultures, one of the newer programs offered in the Ivan Allen College of Liberal Arts. For his research project, he made a documentary film called Euromerica, about America’s multi-faceted relationship to the Eurovision Song Contest. Now, the film is debuting as part of the Academy Award-qualifying Out on Film festival in Atlanta, which runs through Oct. 3. (You can watch it for free at here.)

We talked with Norris, Georgia Tech’s director of media relations and social media, about the spectacle that is Eurovision, why he chose it for his research project, and his advice for anyone considering the GMC program.

Tell us about the film.

Steven Norris: It’s about American superfans of the Eurovision Song Contest, which is wildly popular in Europe but hardly known here. I think it tells a fascinating story about how America is tied to the contest, how America has influenced the contest over the years, how the contest has changed, and where it may be going in the future.

For those who don’t know, what is Eurovision?

Eurovision started in 1956 as a sort of double-pronged event. The contest celebrated new, original songs in an attempt to help reunite a post-war Europe fractured by decades of conflict. It also allowed the limits of broadcast technology to be tested. Eurovision was one of the first live broadcast signals to be shared across multiple national borders. In short, each competing nation submits a song to be performed live. After these performances, viewers cast votes to help determine a winner. The winning nation hosts the contest the following year. It’s not just one of the world’s longest-running live broadcasts; it’s also one of the most-watched television shows worldwide.

In the first few decades, there was a rule that songs had to be performed in national languages. In the 50s and 60s, you’ve got songs in German, Italian, French, Swedish, and Dutch. But as the contest has progressed, and as Europe has sort of changed, the language of popular culture has really shifted towards English. Since the fall of the Berlin Wall, the overwhelming majority of songs — and winning songs — have been in English. The careers of ABBA and Celine Dion were launched by winning the contest. In the past decade or so, American songwriters and choreographers have been getting involved. A few American or American-born artists have even competed.

An IPSOS poll in 2020 found that less than 6% of Americans had heard of or seen Eurovision. So, I wanted to find those Americans who have been following the contest passionately and why it means so much to them, and then explore the contest from that lens. I was working on this with an assumption that American networks are likely to try and make their own version of the contest here in the States. I wondered if these fans and some experts could help unpack how that might happen, if it could be successful, and so on. Now there’s word that NBC is currently working on this project. I feel so weird to say this, but you’ll have to watch the film to see what they say about that. But I think this will really put in context how this unfolds and how NBC approaches the production of this contest. And that’s what I wanted to do with the documentary 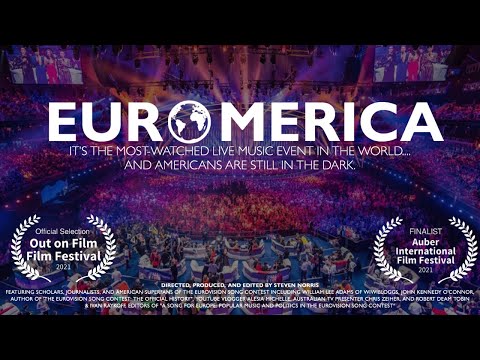 How did you decide on Eurovision as the focus of your research?

I wanted to look at how culture and language played into this global media event, which is up there with the Olympics and World Cup Soccer in viewership. Still, there aren’t a lot of documentaries about it, and there aren’t a lot of researchers outside of Europe investigating this, either. So, you know, it was exciting to be a part of something that feels like it hasn’t gotten its due. Also, Eurovision offers a unique intersection of global media and cultures, so it really makes sense as a research subject for this degree, which is all about the interplay of language, culture, and technology. When I attended the contest in Lisbon in 2018, it was hard for me as a former journalist not to want to put my reporter hat on and ask questions about how this keeps going. So, I knew I wanted to do it, and then I just kept pushing forward.

Can you talk about how it was to pivot because of Covid-19?

I had planned to attend the contest as part of my research project, one of just a handful of researchers worldwide selected to work with the European Broadcast Union. Then Covid-19 hit, and the contest was canceled for the first time since it began in 1956. So, I had to come up with a backup plan. And I started thinking, “Well, I’ve got video editing experience, and I have access to some archival materials. Let me see if I can put together something that way.” One thing I tried to remember is that I wasn’t alone in going through this. You had an entire campus in the summer of 2020 trying to figure out how to retool and how to adjust. The more people you talk to at Tech, you realize that learning how to be adaptive, how to adjust, how to solve problems is just something that you pick up going through programs here. And, yeah, I’m a little bummed I didn’t get to go in person. But I think the bigger lesson that I learned was how to take something really complicated and figure out how to come out on the other side with something successful.

You’re a former broadcast journalist, and of course, you work with short-form video in your job here at Georgia Tech. Still, you’ve never made a feature-length film before. How challenging was that?I did not intend to do a feature-length documentary. Initially, I thought maybe I would start a YouTube channel and just do little vignettes. But I have to give credit to Karen Head and Stephanie Boulard, who suggested putting all of these pieces together and making them into a documentary film. We have a small but mighty film department in LMC, and the guidance I got from John Thornton and from sharing my film in its different stages with my advisors and classmates really helped it come together. Now I can say I edited and produced and directed my own film, and I’m pretty proud to be able to say I’ve done that. I hope that it will show other people that they can do something like this, as well.

In addition to being a Georgia Tech employee, you’re now a proud Ivan Allen College alumnus. How has the Global Media and Cultures program benefitted you?

Prior to this program, I had no formal training in French. I took I took night classes to prepare to be able to interview for the program, which is one of the requirements. And then, I took my language skills up very quickly because of the program. I actually just got back from France, and I was able to navigate getting a Covid PCR test in French. I had to go out into the suburbs of Paris to find it. Beyond that simple asset of being able to speak another language, which sets you apart in the professional world, being able to think critically in another language, being able to talk about your own ideas in your language of study, that will serve anyone incredibly well. This is an incredibly compelling program that I hope gives additional reason for people with non-STEM backgrounds to say, “Tech is for me too.”

What is your advice for anyone who might be considering the Global Media and Cultures program?

I would say just don’t be intimidated. Part of what being at Tech is all about is pushing yourself, pushing the envelope. So, my advice would be: don’t limit yourself, don’t be afraid of the work that’s going to be involved, but know that it is definitely approachable. If I can come into this without having any formal training in the language, I kind of feel like anybody can do this. So don’t be afraid of those limitations, you know. Push yourself beyond that, and you’ll be really surprised at what you’ll be able to accomplish. And I think this whole journey of completing the degree while working full-time — and also producing and editing a feature-length film — now that I look back on that, I’m realizing that the only limitations are the ones we put on ourselves.

The 12-month Master of Science in Global Media and Cultures is a joint offering of the School of Literature, Media, and Communication and the School of Modern Languages. It emphasizes essential skills, like communication, leadership, and global expertise, while providing advanced training in one of six languages — Chinese, French, German, Japanese, Russian, or Spanish. Applications for Fall 2022 admission are due by Jan. 15. For more information, visit the program website.