Please briefly explain the project. What is it about?

Embodied Comics is a form of digital performance based on full-body interaction technology as much as it is a storytelling environment.

Embodied Comics is an attempt to redefine comics` conventions for a narrative performance in a digital environment. It seeks ways of taking digital comics out of the computer screen and merging comics` conventions into three-dimensional real space. The project utilizes the qualities of digital games, interactive narration, digital art, performance, and augmented reality. 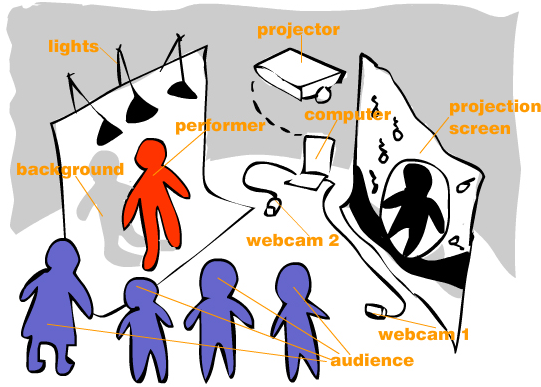 Who are the team members?

I am a Ph.D. student in the Digital Media program, and Yanfeng is a graduate of HCI Master's Program.

What is your role in the project?

I designed the project's main concept, story, and artifacts.

How long have you been working on this project?

My dissertation is derived from Embodied Comics. If I include the writing processes, I have been working on this project for three years.

What are the biggest challenges with this project?

Since my collaborator, Yanfeng, has graduated, finding a new collaborator who can develop the code on JAVA became a challenge.

Did the project supported by any grant/award?

Embodied Comics got funding from Turner.

What outputs do you expect from this project?

In a larger context, the aim in this tangible comics project is to produce a set of possible answers to the following questions: What are the ways of producing new conventions and new vocabulary for a set of art forms, especially for comics, performance, film, photography, and animation? In which ways do a set of media remediate and transform each other`s conventions? What kind of meaning can be generated from the process of translation, reuse, and redefinition of conventions?