I grew up in a fairly small town in the middle of Georgia, where I played a lot of video games and soccer. I'd say a surprising amount of my social activity was online even then, in games.

I chose Georgia Tech, and Computational Media in particular, because I wanted to pursue my passion for games and try making my own. I even had the ambition of joining a AAA study, the likes of Epic Games or Rockstar. I also quickly learned that I liked - or at least was intrigued by - programming. And I've always loved making things (LEGOs, anyone?).

I took classes pretty seriously, and for the most part I was excited about them. I felt empowered by all the possibilities of putting the Computer Science, math, and cultural studies parts together. I joined the Emergent Game Group organization on campus and started helping out on (planned) MMOs, amongst some other projects. I never came out of the {egg} with much to show materially, but the process was invaluable in learning to manage a team, develop systems, and frankly organize a lot of people with very different goals. Some of my best friendships were made there, and it was a huge part of getting internships (Cartoon Network and Primal Screen) and my current job. I can't oversell my time as a Quality Assurance Engineer at Cartoon Network or Developer Designer at Primal Screen enough -- Both gave me new perspectives and I use what I learned in them in almost all of my work. It also helped that the media studies and CS classes at Georgia Tech are not only interesting but very useful when designing and building products.

It's worth mentioning I did side projects, including game jams (Global Game Jam) and VGDev. I really encourage small projects because they let you try out new ideas, work through hurdles, and iterate on your work process. I also slowly built up a small personal library for the Unity game engine as well that I now continuously iterate on and improve, learning quite a bit in the process. I remember as a freshman being very hesitant to start projects. It felt like a big hurdle. If anything I wish I had started sooner, at least making something.

Oh, and, to be clear, there was time here and there to relax and to party.

I currently live in Seattle and work at Microsoft, which I was offered a job at after an internship (which was great). I'm a Program Manager, which involves a mix of management and UX design, amongst a few other things. I drive the design and development of several feature areas, working closely with a broad set of designers, developers, and other program managers to coordinate. Responsibilities include functional design specs and mocks, backlog management (agile), feature ideation, competitive analysis, telemetry assessment, and many others. I'm loving the city and atmosphere, and still work on games in my spare time. My interests are quickly expanding, so I'm expecting other projects soon.

You can see examples of my work at https://www.KyleBlevens.com/all . It's a little outdated content wise and a redesign is coming soon, but I'm pretty proud of most of the projects. RASTER BURN and Walk Through are actually two games I worked on with fellow CM student Adam Le Doux, and were accepted at the Indie Bits Festival. 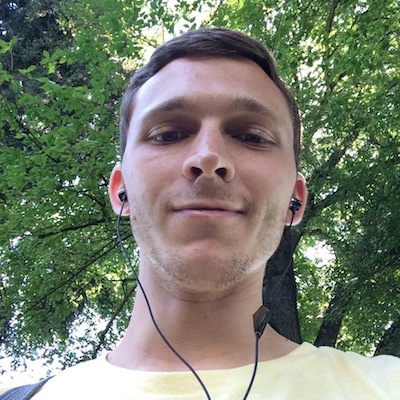