As a young girl, Cooper had always wanted to study theater. She even earned a theater scholarship to the University of Maryland. But her immigrant parents — she was born in Jamaica and came to the United States at the age of 3 —wanted her to pursue a more practical path. So she switched to economics. It seemed businesslike, she thought at the time, without all the schmoozing.

Then came another twist. Late in her undergraduate pursuits, she took a design class and fell in love with Photoshop. After college, she took a job at a graphic design firm, hoping to turn her newfound love of design, color, and creating into a career. “I thought I could work my way up, and my bosses were like, ‘You don’t have a degree, so you’re not going to be able to do that,’” she says.

Flipping through one of the agency’s graphic design magazines one day, she saw an ad for the digital media program in Georgia Tech’s School of Literature, Media and Communication. Suddenly, she found a practical path she could be passionate about. Cooper applied to become a graduate student at Georgia Tech, but she didn’t bother waiting to find out if she would get in. She came down anyway, in the yellow-pollen Atlanta spring, to meet with the professors she was sure would be teaching her. Nor did she have the internship she wanted at internet company MindSpring.

After earning her master’s degree in digital media, Cooper went on to successful work in design and technology, rising to creative director of an Atlanta design firm, then onto a job with Yahoo! in San Francisco.After, she left Yahoo! her Georgia Tech connections paid off. Stevens, a digital media classmate, referred her for a job at Google. After surviving the infamously exhaustive interviews at the tech giant, she got hired on as a user-experience designer for the Google Docs team. She eventually became a manager there, too.

In 2014, she had already tried her hand at standup, and found she liked it — being in front of a live audience felt better than being on camera. But it was that first post that showed her a path to success outside technology. Within a day, the post had a few hundred thousand hits. Within a week, it was up to a million views.

Cooper had finally found her calling: not in acting, not in graphic design, not in digital media, but in comedy. Still, it took months for her to work up the nerve to tell her boss at Google that she was quitting. As she was getting started in comedy, Cooper heavily mined her experiences working in the tech industry for material. Today, she finds her comedy and writing are beginning to morph into new areas as she puts that former work life behind her. 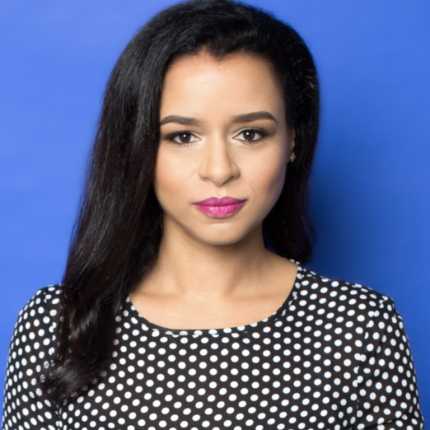